Final preparations are being made for the first recital. Date has been set as 01/02/2012, 7pm at Kingsway Campus. Here’s a bit about the night, taken from the Facebook event page:

Jazz Cafe
An evening of performance and academic presentation.

Opening the evening will be Songwriting & Composition student Sophie Ballamy, performing an acoustic set of her own beautifully crafted original material.

In between the music will be Popular Music Studies student Ben Griffiths, with a presentation entitled “Take The Power Back” – a theoretical cultural study of Rage Against The Machine reaching the Christmas number one in 2009.

Finally Stu Readman & Ash Turner will be performing a recital of a wide variety of jazz fusion material, amongst other genres. Both are highly competent musicians and this is a fantastic opportunity to see the two in full flow!

This is a free event, and there is the opportunity to bring your own alcohol (within reason). All are welcome.

Looking forward to it now! 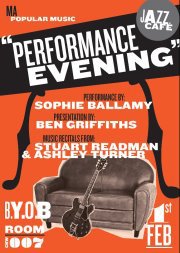 This week is what’s known as ‘personal development week’. I’m hoping to get a couple of songs down with some rough charts etc by the end of the week. I’ve stumbled across a song which I think I will learn and play with a band if possible. It seems like a lot of fun to play, displays elements of groove work and also some technical parts.

The track is by drummer/percussionist/vocalist – Sheila E, and it is a song called ‘Joy’. It’s from her 2007 album ‘Heaven’. As you can imagine from the title, the song is quite gospel orientated, but it contains elements of funk and jazz. The track isn’t anywhere on youtube, but here is a guy named Ramon Sampson (Meinl Cymbal artist & Guitar Center 2009 champ) playing a cover of it (Which is actually quite close to the original).

So I’ve been keeping up with the practice, and looking at some other possible recital songs. Hopefully I can start and get some of these ideas set down and begin writing music, lead sheets etc. Here are some that I’ve been listening to:

George Duke – “It’s On” (Java Jazz Fest 2010) – A great funky tune with Ronald Bruner Jr in the drum seat on this version. I like this version, as it has a lot of groove and feel, but they all let rip as the song progresses, especially the drums.

Alan Pasqua – “Proto Cosmos” – This is a bit of a fusion standard, and I’ve looked through many different versions. Some of the more well known versions can be found with the likes of Greg Howe and Allan Holdsworth playing guitar. The version I’ve picked here is by a group named ‘Mr DanZ’. Drummers Dennis Chambers and Tony Williams do versions of this song and the drums really seem to drive; Mainly due to the open Hi-Hats on each beat. This version I have picked has more of a laid back groove, and there are other versions like it too floating around.

Art Blakey & The Jazz Messengers – Moanin’ – Great drumming, great feel, great song. I’ve discovered a lot more Jazz recently. Going through a bit of a Miles Davis phase at the moment which is great! I would love to get something like this into a recital set.

Trying to narrow it down and make selections is a lot harder than I thought. I think I have enough song ideas in the bag now,  so I just need to be a little more decisive. Having said that, it is near impossible now for me to listen to some new music without thinking ‘..I wonder if this would be fun to play’. Ah well. I guess I’ll just pick one at a time and hopefully at the end of it I’ll have a set.

Listening to more music, editing the list. Hoping to have a few solid ideas down for Monday. The main artists/ bands that are floating around at the moment include: Zenith Patrol (Thomas Pridgen), Mahavishnu Orchestra / Billy Cobham, Frank Zappa (Various),  Dennis Chambers, Joshua Redman Band (Brian Blade), Tower Of Power (David Garibaldi) and the other regulars- Gadd, Colaiuta, Weckl, Bozzio etc. I didn’t appreciate how hard it would be to focus and really narrow it down to a few songs which will display a good few drum techniques. I also want to branch out, having a look at some new styles; especially Jazz. I’ll see my new drum tutor on Tuesday, so I’ll pull both of our ideas together to try and work out the best course of action. On a separate note, one thing I do know..I’d love to give Zappa’s ‘The Black Page 2 Drum Solo’ a good go, but that might have to wait for the second or last recital. Having seen the music (see below) and listened to it a good few times, I don’t think it’s going to be a 5 minute job… 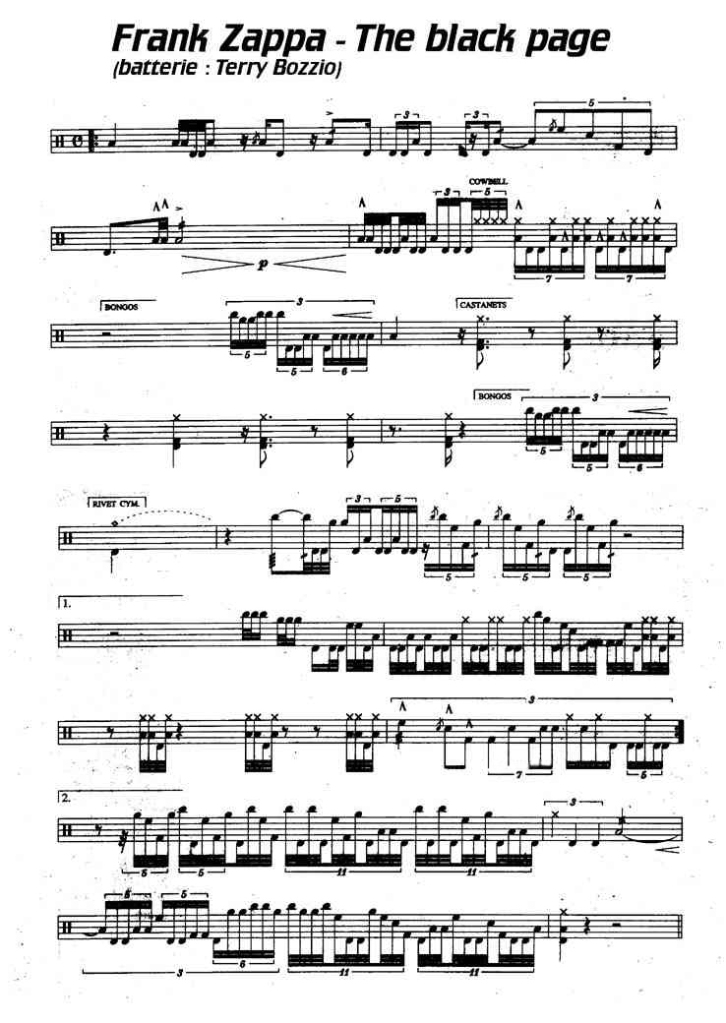 Ended the day as I began, only this time, listening to Frank Zappa. Listened to some rediculously difficult songs, and some rediculously funny ones too. Probably not the best thing before bed. I’ve listened to a lot of music today in the search for recital material and found myself asking the same questions; ‘what is tough enough to play’, ‘what is right / wrong’. I don’t know the answer, but the one I’ve penciled in for the moment is ‘a song, somewhere between what is academically expected and fun to play’. I have no doubt this will change or be ammended, but for now it gives me a path to work along.

Also.. just when you thought you’ve encountered most types of music, the internet will then throw something like this out there. Whilst searching around for some Zappa, I came across this Jazz-Metal band called ‘Panzerballet’. Here is a track by them called ‘Jadoo’. 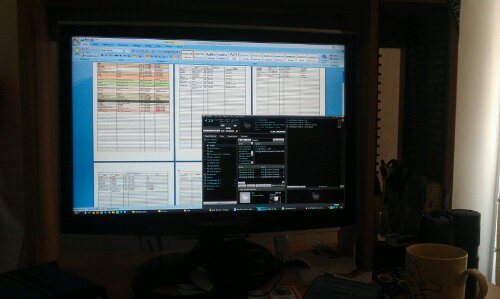 The last three hours or so spent digging through music and dvds. The potential song lists are gradually filling…

One that I’ve listened to quite a few times is a track by Tony Royster Jr’s band ‘ASAP’, called ’10 Minutes’: 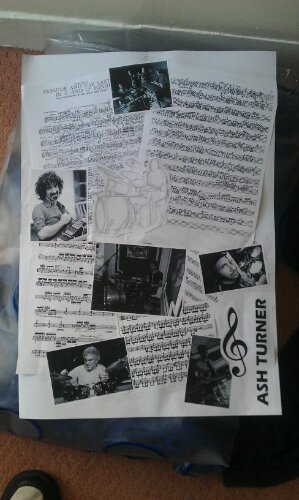 Here’s a poster I made during the MA induction week. A bit of fun, had to dust off the old GCSE art skills 🙂